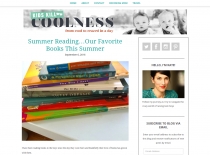 Personalized Package From Santa. This is What I Thought of This Christmas Idea

The Christmas spirit has kicked into high gear this year. The boys are fully ensconced in their belief in everything magical. It has been a very fun December. Given that, I thought this might be the a great year to try Package from Santa. I am thrilled to say it did not disappoint.

After school the boys usually run to check the mail and see if we got any packages. This time of year, we are normally getting a few packages a week.  This day was no different.

They came home from school, went to the front door and found their package from Santa.

The envelope clearly indicates this was something from them, and once I read where the stamp came from they immediately began to get excited.

We received the Silver Package, which included a letter from Santa, a picture of Santa, a certificate of being on the nice list and the biggest hit, a picture of Rudolf when he was a baby.

For the letter from Santa, there were about six different letters to choose from. I was able to go online ahead of time and personalize the letter. As any parent of twins knows, making sure both names are able to be included is crucial and I was able to do just that.

It was so fun to listen to their reaction when the letter mentioned where they live, their cousin's names and other personal details.

Had a Very Shiny Nose

As I noted above, the true winner of this package was the picture of Rudolf when he was a baby. It's been all about Rudolf this year and getting that picture of him, was beyond thrilling. It is a really adorable picture signed by the famous reindeer himself.

Our package also included a video and a phone call from Santa.

The video was a hit with boys. It's well-made and portrays the North Pole as whimsical as kids imagine it to be. They flipped when they saw their pictures in the video. Then proceeded to watch it about 5 times. My only issue with the video is because I have two kids, I wished Santa or the Elf could have said their names. Instead I had to click "kiddo" in substitute of their names. Thankfully they haven't quite grasped pronouns so when Santa said he instead of them, it went right over their heads.

The phone call I scheduled a few days before Christmas. It is an easy to use app that allows you to pick the type of phone call you want to receive.

There are still a few days left to order a package from Santa. Don't miss out! Save 25% OFF your order when you use FAMS17 at checkout.

Leave a Comment
submit a review Join our blog team